Africycle’s main purpose is to help improve access to quality and affordable bicycles in Malawi. This is being achieved through a network of partners and supporters who collect and ship second hand bicycles to our program from around the world. Once the bicycles are received in Malawi, they are rebuilt by a team of locally trained mechanics who return the bikes to like-new condition, ready for sale. The bicycles are then sold on at a low cost, helping us to mobilize the people in rural communities that can realize the greatest impact of improved transportation. Selling the bicycles allows Africycle to maintain a sustainable model, in which funds are used to cover the cost of shipping bikes and local operations, all the while, mobilizing Malawians as effectively as possible. Africycle also reinvests into the local communities through bike donations to local volunteer organizations and funds community child care programs that are helping to feed more than 500 orphaned and vulnerable children every.

Africycle became a registered Canadian Charity in 2007, a registered Malawian Trust in 2010 and has established an unmatched reputation for high quality, durable and affordable bicycles throughout Malawi. 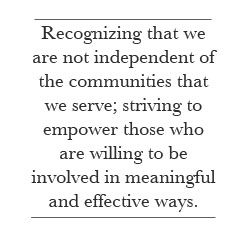 Faith – It is our call to bless others with the love and compassion with which we have been blessed. It is this core belief that motivates and drives the vision, mission and values on which Africycle has been founded.

Socially Responsible – Contribute to society to benefit others rather than just self.

Transparency – Integrity of character and action; committing to uphold the mission/vision we set out to achieve.

Community Involvement – Recognizing that we are not independent of the communities that we serve; striving to empower those who are willing to be involved in meaningful and effective ways.

Respect – Highest esteem for those who contribute time, money and resources; and respect for those whom we work to serve.

Environmentally Responsible – Engaging in and promoting activities that benefit the natural environment.